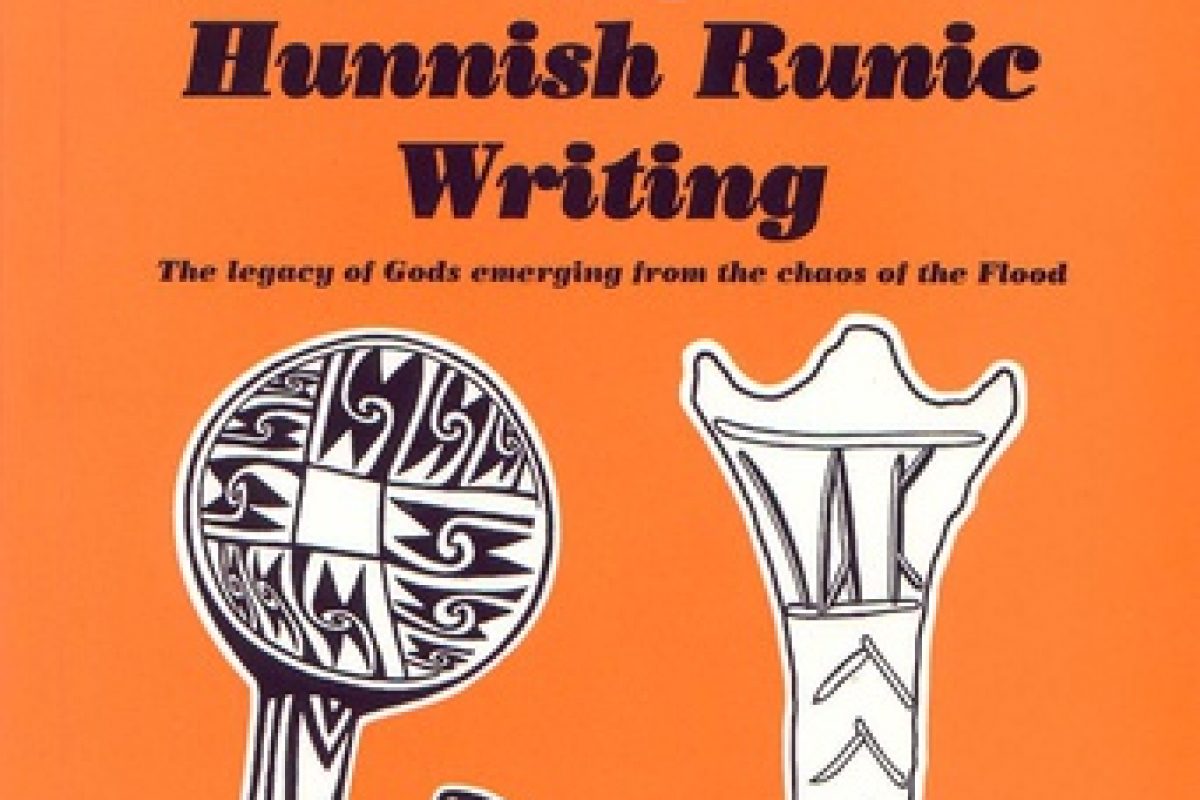 The legacy of Gods emerging from the chaos of the Flood

Preface to the English edition:

The scientific world is just beginning to recognize the historical significance of Székely (Hunnish) runic script. With the exception of some descriptions and records, the books and articles on Székely runic script, though they could fill a library, do not have much lasting value. Works on the history of writing usually just mention its name and consider it a late descendant of Old-Turkish script. However, extensive research on Székely script has led us to the conclusion that it is not a thin twig but the very stem from which the tree of writing systems has grown.

At present Hungarian researchers cannot but admit that the concept of Old-Turkish origin they have maintained for a hundred years does not hold up any longer. However, they have not worked out other theories of origin, because the special features of the Székely writing system do not fit into the present theories on ancient history. And that is exactly the significance of this nearly forgotten script. It makes possible conclusions so far not thought of.

Historical records and archaeological finds prove that the Huns, emerging from the mists of millenia before the birth of Christ, used it. This steppe nation imposed tribute on the Chinese, Persian, Byzantine, and even the Roman emperors. Is it surprising after this, that we find treasures in the Hunnish heritage?

The equestrian culture of the steppe has preserved an ancient view of the world practically unchanged. Man could conquer the steppe only after domestication of the horse, probably around 4000 BC. Thanks to the breeding of large-bodied animals, a highly developed culture developed on the steppes. However, the steppe’s special resources restricted the possibilities of economic development, and thus conserved the lifestyle, as well as the millenia-old symbolism and philosophical system of the people who lived there. Thus today Székely script offers one of the best means to understand Neolithic culture and the beginnings of human civilization. The information Székely script conveys is so important, that man cannot understand his own past without knowing the origin of Székely runic script.

We can recognize this only after solving several scientific problems. Such unresolved problems are for example the similarity of characters in different linear writing systems; the relationship between Székely runes and popular artistic, religious and royal symbols; connections between script, language and mythology, etc. In possession of these new results, with the help of Székely script complex symbols on pottery from the European Neolithic or American Indian cultures can be understood and deciphered.

Scientific analysis of Székely script has not been a smooth process. Although as early as the 13th c. Hungarian chronicles mentioned a “Hunnish-Scythian” script, which was still used by Székelys, analysis of the written relics was still a discovery for “modern science.” For example in 1864 Balázs Orbán called attention to a runic inscription from 1668 in the boxed ceiling of the Unitarian Church in Énlaka. For a long time this was the only known text to prove the existence of Székely script.

This summer a short inscription was discovered on the clay nozzle of a blast-furnace from the 10th century. Today the number of runic texts mentioned by various authors is about 50.

Most of them are inscriptions painted, scratched or engraved into the walls, ceilings, stones, bricks, or tiles of Transylvanian churches from the 13-16th c., and usually have something to do with the building’s construction. Letters exist from István Szamosközi, a history writer in the 16th c., and from Hungarian monks in South America, who used Székely runes as a secret writing, when dealing with sensitive questions. The Constantinople text was first copied by Hans Dernschwam in 1553. It had been written in 1515 by imprisoned Hungarian envoys who wanted to inform others about their fate. The interest of the contemporary science is illustrated by several character sets (e.g. the Nikolsburg alphabet of the 15th c.) as well as by some longer documents. The system of writing and the runic variant of the Lord’s prayer has survived in Rudimenta written by János Thelegdi in 1598, while the words of a runic calendar-stick have been copied and left to us by count Ferdinando Marsigli. These records remained in manuscript form and were buried in libraries for a long time.

The exact number of texts can hardly be determined. New discoveries are reported in the media almost every year; their interpretation is regularly late or ambiguous, which hinders their classification. What makes our work even more difficult is that the principles of script-classification have not been elaborated yet. Székely runes are letters and hieroglyphs at the same time, which have been used either as symbols, complex signs or decorative motifs. The inventory of texts is much longer if these latter relics are also included. Otherwise we will find ourselves in the odd situation that an easily readable and comprehensible text is not considered writing just because its letters are composed in a floral pattern.

The present Hungarian academic-scientific point of view on this subject is characterized by perplexity, as it cannot explain the recently recognized connections between signs and symbols. For instance the frame on the Énlaka inscription, which has been regarded as a decoration so far, has been deciphered only recently, despite the fact that it has been the most often mentioned Székely text in the last 125 years.

The stakes are high, since the parallels of the Énlaka flower-like sign-montage can be found in the 4000-years old Hittite rock-pantheon in Yazilikaya and the rock-drawings in Khwarism…